Together SSE Renewables and RWE Renewables have been active in the East Anglia region since the organisations developed the Greater Gabbard Offshore Wind Farm, located 25km off the coast of Suffolk in the North Sea. The 504 megawatt (MW) project started construction in 2008 and at the time was the world’s largest offshore wind farm. It has 140 wind turbines and was commissioned in September 2012. North Falls is an extension project to Greater Gabbard. 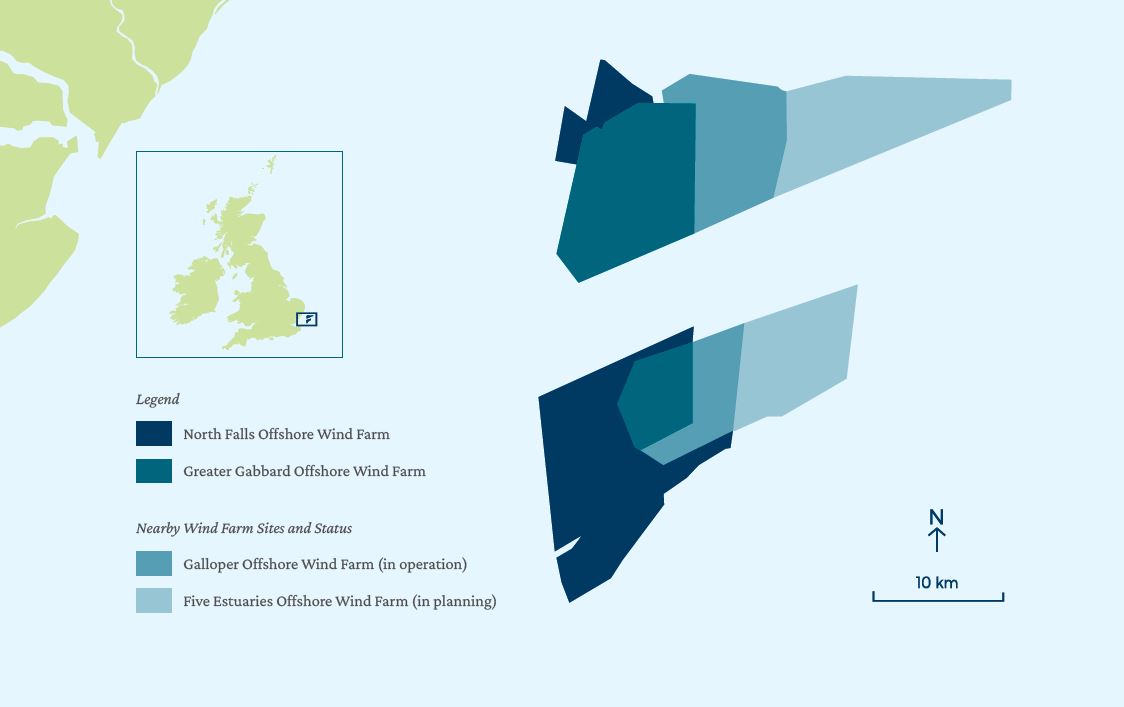 In February 2017 The Crown Estate, manager of the seabed, launched a process for wind farm operators to apply for extensions to their existing projects. This opportunity closed in May 2018, with eight project applications received.

Expert independent advisors were utilised and there were consultations with the statutory marine planning authorities, the statutory nature conservation bodies and a number of non-governmental stakeholders.

In August 2019, The Crown Estate announced the conclusion of the HRA confirming that seven of the 2017 extension application projects, representing a total generating capacity of 2.85GW, would progress to the award of development rights, including what is now called North Falls Offshore Wind Farm.

The Agreement for Lease between North Falls Offshore Wind Farm and The Crown Estate was signed in Autumn 2020 and the project is now in the early stages of development with the aim of achieving a Development Consent Order (DCO) in 2025.

Construction would then take place in the latter part of the decade with a view to the project being operational by 2030, aligned to Government targets.

Factsheet More on The Crown Estate

Located 20 kilometres off the UK coast in the southern North Sea, covering area of 150 km2

Number of potential turbines, depending on the size selected

Onshore grid connection is still to be provided by National Grid but a likely location is in North Essex.

Order application and supporting environmental assessment scheduled for submission in 2023

In close proximity to North Falls is Five Estuaries Offshore Wind Farm, the extension project to the existing 353MW Galloper Wind Farm, located around 30km off the East of England coast.

While Five Estuaries is a distinct and separate project from North Falls, given the projects’ adjacent locations, opportunities for co-ordination will be explored and implemented if practicable, commercially viable and within the relevant regulatory frameworks.